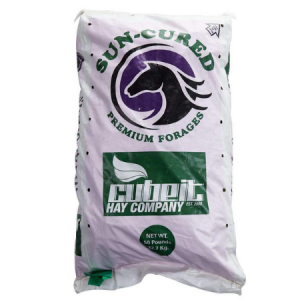 Alfalfa Hay is a main staple and one of the most highly sought after forages in the world. Grown in the Snake River Basin of Idaho, our Alfalfa Cubes contain some of the highest protein of any forage grown in the United States. We offer Alfalfa Cubes year round with consistent quality.

WHY ALFALFA HAY CUBES?
Simply put, bales are heavy, messy, and cumbersome! But you already knew that, so lets talk about the advantages of Cubes and some things you might not have thought of:​Reduced feed waste – Feeding studies reveal that as much as 20% of conventional hay may be wasted when fed. Horses fed long-stem hay can separate the leaves from the stems and consume the parts they prefer; this does not happen with cubes.

Controlled feed intake – It is easier for the horse owner to monitor and regulate the daily intake of cubed forage than long-stem hay.

Less dust than long-stem hay – Our Alfalfa cubes contain little dust, so they represent a healthy dietary choice for horses with respiratory problems.

Reduced storage requirements – Cubes are denser than hay and therefore require less storage space. Approximately 3 bags of cubes fit in the same area as an average-sized, small-square bale of hay.

Ease of handling – Cubes can be mechanically handled in bulk.

Reduced transportation costs – Cubes are denser than hay and allow trucks to be loaded to their full legal capacity. This is not always possible with hay. Shipping costs for cubes can be reduced, assuming the shipping distance is the same.

Ease of transport– Alfalfa cubes take up less space in the trailer and may be easier for horse owners to take to shows or on trail rides.

Our Premium Alfalfa Cubes can be fed to Horses, Mules, Llamas, Cows, Sheep, Goats and Elk.